Africa has been still a land of ethnicity, religious and ideological conflicts, as a result of wrong bordering by French and British strategies since the achievement of independences.

Many African countries are suffering from interior religious conflicts like Somalia and Nigeria, while others are suffering of social ethnicity clash such as Guinea and Sudan Besides, in Central African Republic (CAR) both of ethnicity dispute and religious have shaped a long fray and led the country to a chaos.

For that have been noted, the United Nations (UN) and France made an expedite military intervention not to end the civil war but, to maintain the conflict, and prevent the resolution of the battle, and triumph in favor  of any of disputing groups.

A land-locked in the middle of the African continent, rich of every kind of natural wealth: diamond, gold, oil and so one, the Central African Republic has known little but instability since independence. Due to its geography and history, the Central African Republic lies at a crossroads between Muslim pastoralists and merchants of the Sahelian north and sedentary Animist and Christian communities of the southern savannas.[1]

The crisis in CAR is not recent nor short term. The history of ethnical violence in this country could be characterized from earlier 1960s just after independence was given by France. If we return back one century later, Before French colonists arrived in CAR around 1885, the region was dominated by Sultans connected to trans-Saharan economic and social networks[2] On arrival in the region in the late 19th century, the French colonists quickly set out to undermine the power of the sultanates and establish their own rule.[3]After the country gained independence, the series of coups start off since 1965 until our days the country has been subjected to five separate coups d’état.

The first of which occurred in 1965, when President David Dacko was overthrown by Colonel Jean-Bedel Bokassa, supported by French government, following years of additional unrest under the Bokassa regime, Ange-Felix Patasse became president in 1993, the democratically-elected Patasse stayed in power for a decade, until he was ousted by former army chief of staff Francois Bozize in March 2003.[4] 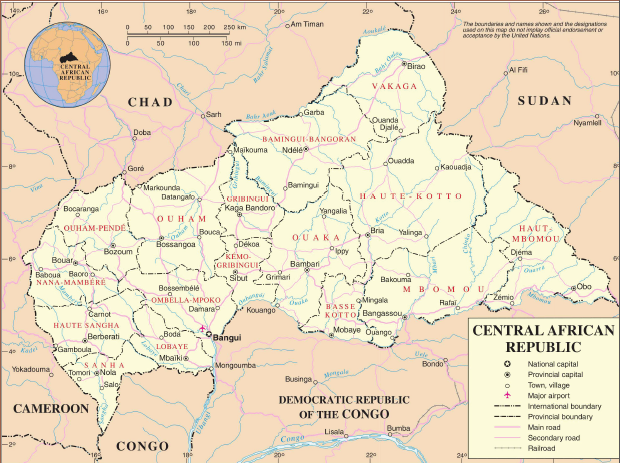 Yet, from this point one the recent conflict came out, but, let’s not forget that the fundamental problem of the CAR was at least thirty years of weak and corrupt governments that failed (if they even attempted) to forge a national consensus and develop the country[5].In addition to CAR government, two other belligerents emerged in this conflict – the Muslim Seleka rebel movement (who initiated the fighting after 2013 coup) and the Christian anti-Balaka militias (who mobilized as a response to Seleka gains).[6]

Influenced by French broadcasters, the social landscape has created deep distrust between communities, and between the general population and central government, however, the lack of government administration or investment in the North of the country adds to the narrative that the government does not care about its Muslim citizens – many of whom already share greater social connections with communities in Chad and the Sudan[7], like Muslim Fulani Ethnicity, as France was, and always been, a main enemy of Muslim Fulani ethnic throughout history and across the African continent the French media participated to a propaganda against CAR Muslim.

This in turn helps ferment opposition against Muslim Central Africans by Christian Central Africans by adding to the narrative that Muslim Séléka forces, supported by foreign powers, are trying to “Islamize” Central African society. This is evidenced by radio broadcasts which, when Séléka forces were moving toward Bangui in 2013, warned Christian citizens that “the Wahhabists are coming” and that they were “waging jihad”[8] from this spot on the crisis escalate into civil war.

Though, the escalate crisis in CAR is related to Country historical conflict, as we mentioned earlier, nevertheless there are some significant impeller that motivate ongoing conflict which is two armed group: SELEKA and ANTI BALAKA:

The anti-balaka had a long history in the Central African Republic. Originally, they were local self-defense groups. Every village had its own militia. The anti-balaka traditionally hunted down bandits and arrested them. That was before President Francois Bozize came to power.

During the Car’s 2004-2007 war, militias, currently co-opted in Anti-Balaka, opposed the abuses of CAR’s main rebel formation, the (Armée Populaire pour la Restauration de la Démocratie), In French, (APRD) Militias in collaboration with the Union des Forces Démocratiques pour la Rassemblement, in French, (UFDR), a collective of dissident groups led by the current transitional president and then rebel leader Michel Djotodia, launched offensives in the north, seizing key towns but also committing atrocities including summary executions, abductions and forcible recruitment of child soldiers.[9] Which mean that Anti Balaka group origin is a separate rebel from the military; Help them to acquire weapons against Seleka.

Starting with recent crisis, The Central African Republic conflict began in 2012 when the Seleka, a different group coalition with Majority Muslim, attacked different cities in the country in order to overthrow the regime of President Francoise Bozizé[10].In October 2002 Bozizé swept into the capital with 1,000 troops he launched a coup and took control[11] the capital and run the country until 2013 before he were overthrow by Seleka.

There are three main countries involved to the CAR’s conflict which is Tchad, France and US. Tchad is closed concern with CAR conflict as there has been a large amount of activity of Chadian rebels in the CAR and “many [Chadian rebels] who took part in the attacks from 2008 to 2010 on N’Djamena; in addition Chad is drilling oil from that border region and it’s actually a shared oilfield with CAR[12]. France have nothing interest in CAR conflict or victims but, commercial giants, such as Total and AREVA, which are well known; While France used to count on the CAR as a valuable reserve of uranium[13]; France is ready to defend any party, group or government (come to power with coup or not) that willing to defend his interest in CAR, regardless the violence of human right and war crimes committed.

As oil experts predict that the amount of oil the United States receives from the prolific fields of Nigeria, Equatorial Guinea and Angola will double in the next five years; Already, 15 percent of the United States’ imported oil supply comes from sub-Saharan Africa; on a regional level, the US is interested in the CAR not just for any of its vast resources, but specifically oil[14].

After tried to send his forces to CAR with his own and failed to do so, Turkey accepted to join EU forces for intervention military in CAR[15]. As France and UN forces took control the country, no way for Turkey to intervene alone there. This co-join intervention, however, no chance for Turkish government to support Muslim in CAR if needed or necessary.

After 14 years of conflict: ethnicity and religious war, displacement, Malaria and other diseases, disfunctioning of the state, starvation, fear, insecurity and weapons speared Is the situation that the country’s level has reached under US and EU observer.

The New York Times journal reported that: Central African Republic ranks No. 1 as the hungriest country, according to the latest Global Hunger Index. A quarter of the population has been forced to flee fighting, and the Red Cross warned that humanitarian conditions were “rapidly deteriorating.” Yet the United Nations says that its humanitarian plan for CAR is only 2 percent funded[16].

The UN and EU peacekeepers do nothing to overcome conflict and maintain peace in CAR but, underage sexual abuse, as Aljazeera note it: Human rights groups believe several children in the Central African Republic (CAR) were raped in 2013-2014 by French soldiers who were there to protect them[17].

According to Council Foreign Relation, in his ‘global conflict tracker’ programme: since the outbreak of conflict in 2013 in CAR, three thousand to six thousand (3000-6000) people have been killed through increased executions and mutilations, and more than four hundred and fifty thousand (601,600) refugees have been displaced, the majority of which fled to neighboring Cameroon, and 2.4 Million Number of people in dire need[18].

To sum it up, the conflict in the CAR like elsewhere in Africa and middle east, is created, raised and maintained by foreign interests for easy access to natural resource, after that they send troops to keep looting until the resource run out,  by then the conflict will be over.